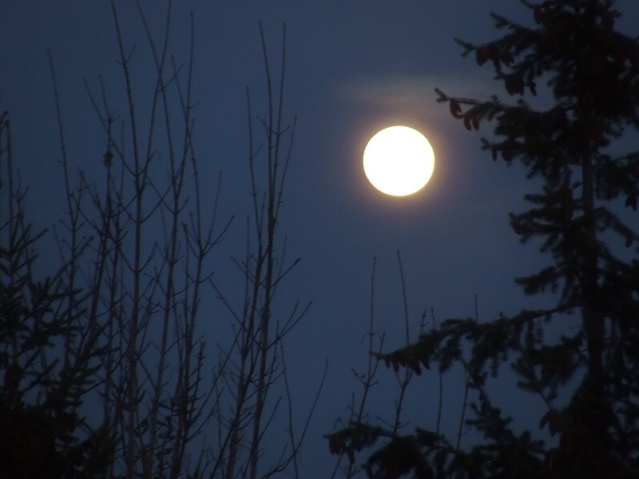 Getting a good night’s sleep. What’s that you ask? Here I thought once our children were older and sleeping through the night, we would just fall back into a pattern of sleeping well and waking rested. No, getting older brings a whole new set of sleeping challenges (Another issue for a different blog post). But what has kept us awake this past week is small, furry and sleeps in our bed. Delilah, our little Dachshund dog. We adopted her from a rescue a couple of years ago. Delilah usually sleeps the entire night, snoring away and snuggled up tight to me. But this week she had woken in the middle of the night needing to go outside frequently. Living on the coast at the bottom of Sumas Mountain, wildlife is a common sight. So Delilah is not able to go outside by herself for fear of her becoming a sausage dinner to a critter.

Delilah gave me the nudge to get up. No amount of coaxing was going to get her back to sleep. I clumsily reached for my glasses…another issue with getting older. 4 am on the clock. Using the sweetest voice I could muster at 4am, I woke my husband. He mumbled, “Why can’t you take her out?” He already knew the reason but was biding himself a few more seconds under the covers. I tend to be a big ol’scaredy cat to go out in the middle of the night.

Don’t get me wrong, anyone who knows me knows that I love wildlife; but not the unexpected encounters in the dark.

Partly to reassure and partly out of frustration, my husband said, “There’s not going to be any animals sitting on our lawn waiting for you.” He searched for his shoes. Taking Delilah out, he continued to mutter to himself about the lack of sleep he’s been getting. Poor guy had not signed up for middle of the night pooch potty duty. Looking out the window from the living room, I saw something on the lawn about 10 feet from my husband and dog. At closer observation, I realized there hunched up on the lawn was an owl! An owl was on my lawn! Picturing this owl attacking my dog, I frantically called out to my husband. This scared the owl away. My husband came back inside with her. He had seen something when he went out but was not wearing his glasses so had not realized it was an owl. I felt a twinge of guilt when he asked if I was more concerned about his safety or was it just Delilah I was worried about. Oops. Of course I was worried about him too.

After the excitement, Delilah and my husband went back to sleep. Unfortunately, I could not fall back to sleep easily. So I stayed up researching owls. I came to the conclusion that the owl was a barred owl. I also did some research about owls eating pets. Putting my whole “an owl is going to eat my dog” worries aside, it was pretty incredible to see it soar off from our yard with silent wings.

Delilah is back to snoring and sleeping through the night again. Same thing can be said for my dear husband. But me, I keep getting up, sneaking downstairs, hoping for a glimpse of the owl, because you never know what you may see…..when nature calls.

What encounters with nature have you experienced recently? I’d love to hear about it.

May your day be filled with unexpected surprises and your cup with coffee.

1 Comments on “When Nature Calls”